The build pipeline describes the process by which new code makes its way out to a production environment. One may even consider a developer building code on his or her local machine and manually deploying it to a server a primitive build pipeline. While this approach may work well for small or non-critical operations, it is insufficient for most professional work. Whether you're working in the hottest new startup or for a larger company, defining an effective build pipeline and streamlining your deployment process is of utmost importance. While this article will omit implementation details, I will go through a thorough explanation of each step and why it's important and how it improves the lives of developers and overall stability of products.

Before I delve deeper into build pipelines, I want to briefly familiarize the audience with continuous integration, continuous delivery (CICD). This concept has been around for several years, but I have heard grumbles about this from colleagues. In summary, the idea is that every commit to the mainline (i.e. usually master branch in git) is built and continuously tested (i.e. continuous integration) and when all of those tests pass, the code is then deployed immediately to production (i.e. continuous delivery).

Many people claim that such a system sounds good in theory, but always fails in practice. Well, I happen to have it on good authority (i.e. personal experience) that this sentiment is categorically false. Yahoo/Flurry/Oath have been using CICD for some time now and the method works very well. In fact, it saves a lot of headache and avoids many mistakes or potential outages which occur from manual deploys or even gated deploys (the discussion of distinction between the two may be for another time, however).

While I am a proponent of CICD and will center our build pipeline discussion around this idea, I must admit that it does front-load a lot of the work. That is to say, CICD requires a larger upfront investment cost than traditional means of operations and code deployment. While the infrastructure can theoretically be built over a period of time, it is best to have all of the infrastructure in place before releasing your product.

In this way, you will be able to allocate sufficient resources into building a robust system. If the product is released before the CICD infrastructure has been properly laid out, it's very easy to get side tracked into focusing only on improving the product rather than process of releasing changes. This ultimately ends up wasting a significant amount of developer resources. Please note, when I say infrastructure I really mean your deploy scripts or something similar. I expect most companies will not be rolling their own CICD solution and instead use something like Jenkins or Screwdriver.

tl;dr. CICD is great but you need to give it the upfront investment it deserves when you're building a new system. Ensure that the infrastructure is in place (even if not all the testing is finished depending on how fast and loose you're playing) before officially launching your product. See cert

Philosophy of the Build Pipeline

Let's move on and discuss a bit more deeply about the ideas of our build pipeline. In summary, an effective build pipeline should have at at least 3 phases:

While we have discussed 3 primary components of a build pipeline, this often represents the bare minimum. Build pipelines can be arbitrarily complex and can even include triggering up- or downstream dependencies. No matter how complex your build pipeline dependency graph becomes, these 3 phases should be present in some capacity.

With the 3 components listed above, we will now go through an example of a more sophisticated build pipeline. While not overly complex, this is a realistic pipeline that one could use to deploy their own code. Again, implementation details are omitted, but the core concepts remain. 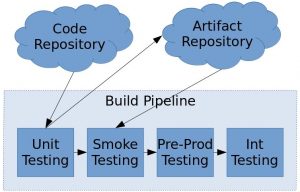 A brief explanation of the diagram above follows:

By the end of this build pipeline, your newly built and tested code is fully deployed to production if all steps pass. If at any point the tests fail, the build stops at that point and does not proceed further in the build pipeline. It is important to recognize that during the final integration testing phase that this could, in fact, leave the subset of boxes OOR if the tests fail. As a result, the number of boxes deployed at once should be an acceptable number of failed hosts for your application.

While more complicated build pipelines than we've discussed exist, build pipelines do not need to be complex to be useful. However, there exists a minimum set of functionality they must test for effectiveness. Even the simplest of build pipelines can improve developer productivity and reduce operations mistakes. By simply automating the testing process alone, we've avoided mistakes of human error (i.e. forgot to run a test, skipped a test intentionally, didn't follow deployment steps properly for service, etc.) and ensured that our tests are always properly run. Not only does this avoid error, but it also frees up engineering resources to perform other useful work.

Above all, if you do not currently have a build pipeline, you should consider designing one and implementing it. Not only will it improve the lives of your engineers, it will provide confidence to all of your business units. A proper build pipeline allows everyone in your organization to feel confident about code quality for user-facing products.